Extending the Eden editor is a bit fiddly, especially if you aren't accustomed to writing Arma 3 config.cpp files or creating addon .pbo's. Fortunately the Debug Console—which was carried over from the 2D editor where it previously wasn't much use—runs scripts in the Eden context, exactly the same way that a full Eden addon would. Scripts that manipulate Eden objects and settings can be pasted into the Debug Console and executed immediately.

To try it out:

The created objects will immediately show up as Eden editor objects: 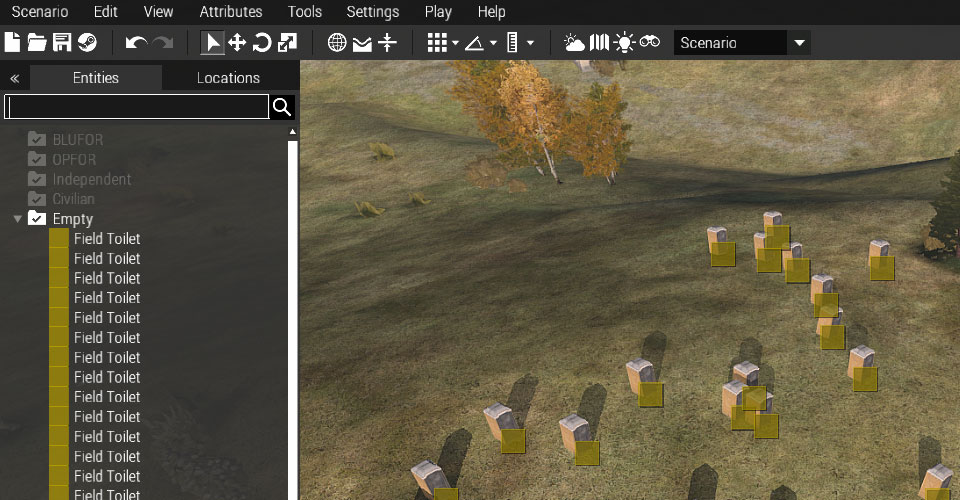 Although you could randomly place toilets in the mission with an init.sqf script, placing them in the editor gives you instant feedback, and also lets you tweak the results.

You can't add user interface elements to Eden—such as menu options or object attributes—without making a full add-on, but you can use the console to automate such things as:

After a few more examples, we'll cover what you need to know to make your own script snippets.

Placing down "background" litter to enhance the ambience of missions is as easy as dragging objects from the object list in Eden, but by default everything will be pointing north. Rather than tediously rotating a large number of placed objects, you can select them and run this script:

It's ideal for fields of wrecks or other littered objects: 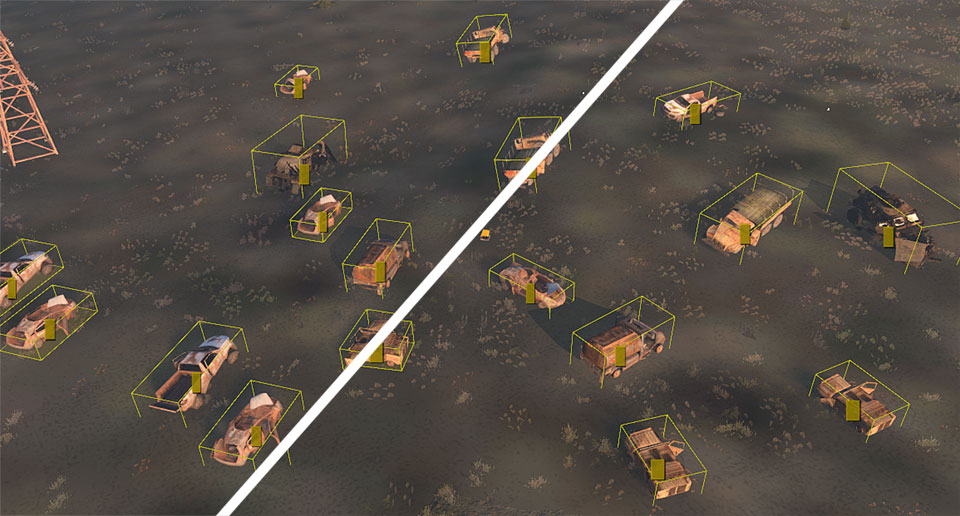 One part of the script above that may not be self explanatory is the call to collect3DENHistory. Without it, each change a script makes—like setting the rotation of a single object—is added to the undo stack as one item. Undoing the entire script would require many presses of the undo key.

Any changes made within a collect3DENHistory block—however—are grouped into a single undo item.

If you need to swap out a large number of objects of one type for another—for example, changing all your UCP camouflage soldiers to OCP camouflage as the United States Army currently is—you can do so with a console script.

This script puts the selected objects into a perfect circle:

Scripts that place or position objects seem to be the most fun to play with:

Ballstic headgear is nice and all, but random caps for the selected units look cooler:

Unit gear is a little unusual in Eden; firstly, you modify the gear directly in your script and then tell Eden you've changed it with the—currently undocumented—save3DENInventory command. This isn't typical of Eden scripts; normally you modify the Eden properties of an object and let Eden make the changes to the real object.

Secondly, it isn't part of the undo system. Changes made by both scripts and the arsenal menu item can't be undone.

That the save3DENInventory command isn't covered at all in the extensive Eden documentation could be a hint that inventory handling may change—or, perhaps—that it was just a late addition.

One omission from the scenario attributes reference—and also the BIS_fnc_3DENExportAttributes function that generates the reference—is what the section should be for each attribute group:

To set the "Author" attribute shown in the General category in the reference for example, you use "Scenario" as the section: 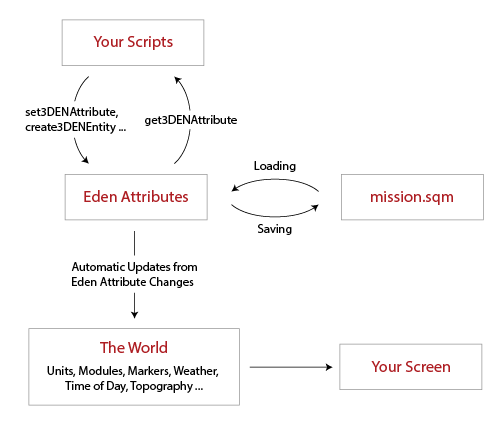 The position of a unit, for example, is updated in two steps:

The key thing to remember is the transfer of data from Eden Attributes to The World is unidirectional; although you can actually move entities with commands such as setPos—and even see those changes occur on the screen—the changes won't end up in the mission.sqm and will instead be overwritten when the Eden Attributes change, or when the mission is previewed or reloaded.

The one exception to this is with unit gear. Unit gear must be updated on the unit itself, and then copied back to the Eden Attributes via the save3DENInventory command.

Everything else that is available in a mission is also available in Eden. You can, for example, query for map objects, roads, and any other properties of the world or game.

All of the Eden specific script commands are listed in the Eden Command Group page. Many of the Eden commands are only suitable for use in addons—the following is a list of only those commands that are useful in the debug console:

Once scripts get larger and more complicated, it becomes tedious to paste them into the debug console. Scripts can be saved into a text file and replaced in the debug console with a call to execVM.

While a mission is running, there are three places that are searched for scripts accessed by execVM, loadFile and preprocessFileLineNumbers:

It turns out that all three directories also work within Eden—even though your mission isn't actually running. The script files aren't cached, so each call to execVM or any of the other functions will load a fresh copy each time you execute them.

Hint doesn't work in Eden, presumably due to different UI/HUD resources being active. To print values out, use systemChat: